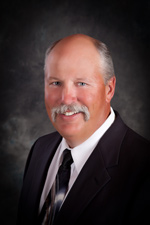 After graduating from Mount Hood Mortuary in 1980, Joe returned to the family business in Miles City. Joe and Patricia Riley were married in 1981, and have four sons: Jason, Scott, Mikel and David. Joe is a member of the Rotary Club, Elks, Miles City Club, Montana Funeral Directors Association, National Funeral Directors Association and Grace Bible Church. Joe relaxes by spending time at the barn with his Clydesdales. He also enjoys the challenges and rewards of car restoration, as well as being a pilot. 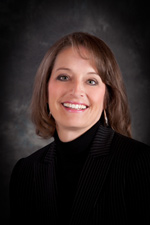 Patty was born in scenic Missoula, MT. She graduated from the Powder River High School in 1978 and then attended college at Montana State University in Bozeman, MT. Patty and Joe Stevenson were married in 1981, and continued working together at the funeral home in Miles City. Patty and Joe have four children: Jason, Scott, and the twins, David and Mikel. Patty is a member of Grace Bible Church and loves to watch sports whether on TV or in the stands. 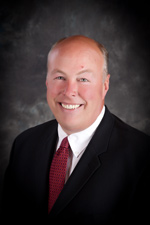 Todd was born and raised in Miles City, MT and is a graduate of Custer County High School. He knew from an early age that he wanted to be a Funeral Director. Todd married Terri married in 1982, and finished up his Associates degree at Miles City Community College. He then went on to get his Mortuary Science degree in Portland Oregon, where he and his wife graduated together in 1984. After graduation, the couple came back to Miles City to work in the family business. Todd has a heart for funeral services, and he is also a visionary. He wanted to expand into other area towns and serve their communities as he has served Miles City and the surrounding areas. As the proper opportunities arose, he was able to take the highly regarded Stevenson & Sons Funeral Home name to many communities. Todd now spends a great deal of his time ensuring that the special care, personal attention and profound respect that are the foundation of Stevenson & Sons Funeral Homes are always honored at all of the different locations. They have two adult children: Tiffany and TJ. Tiffany is married to Ren Gardner and TJ is Married to Haley (Anderson). Tiffany and Ren have four boys. Todd actively follows his four grandsons as they participate in numerous and varied sporting events. He also very much enjoys just spending time with them. He is a member of Grace Bible Church, Montana Funeral Directors Association, National Funeral Directors Association, The Miles City Club, Miles City Town & Country Club and served on The Board of Morticians. He enjoys hunting, fishing and cooking for family and friends, when time permits. 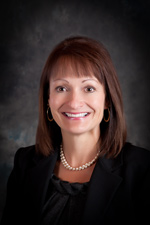 Terri was born in Redding, CA. Her father worked for Conoco Oil, so they were transferred to many locations throughout her education. She graduated from Green Mountain High School in Lakewood, CO. She attended Oklahoma Baptist University for her freshman year and then went to Western Bible College in CO for two years. She married Todd Stevenson in 1982, and they finished credits for Mortuary School at Miles City Community College. Both graduated with their degrees in Mortuary Science from Mount Hood in Oregon in 1984. They headed back to Miles City to help in the family business. They have two adult children: Tiffany and TJ. Tiffany is married to Ren Gardner and TJ is Married to Haley (Anderson). Tiffany and Ren have four boys. Terri also enjoys her four, very active grandsons who regularly participate in many various activities. In their free time, she is at baseball games, football and soccer fields and gyms watching basketball and wrestling. Terri is a member of Grace Bible Church, The Town and Country Club, Montana Funeral Directors Association, where she served as President in 2009, and The National Funeral Directors Association. Along with spending time with her family, she loves gardening, fishing and golfing. 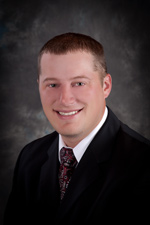 Scott was born and raised in Miles City, MT. He graduated from Custer County District High School in 2002, and then went to Dickinson State University, where he got his degree in Business Management. Scott then attended Mount Hood Mortuary School, where he graduated in the summer of 2007. Scott and his wife Andrea have two children, Landon & Emerson. Scott is a member of the Grace Bible Church, The Miles City Club, the Town and Country Club, Montana Funeral Directors Association and the National Funeral Directors Association. Like others in his family, Scott enjoys Montana’s outdoor life. He enjoys hunting, fishing, golfing and watching football whenever he can find some time for relaxing. 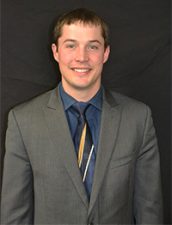 Mikel was born and raised in Miles City, Mt. After graduating from Custer County High School, he attended college at Montana State University-Bozeman. He received a Bachelor’s Degree in Finance, with a Minor in Economics. After completing his Bachelor’s Degree, he studied at the prestigious American Academy McAllister Institute of Funeral Service in New York, NY, where he received his Mortuary Science Degree.

Mikel is one of seven family members serving as a mortician, and is part of his family’s third generation in service to those in need. Mikel married his wife; Kami in August of 2018 and they currently reside in Helena. In his off-hours, Mikel enjoys golfing, fishing, hunting and working on old cars — just like his father, Joe Stevenson. Mikel also loves watching sporting events — just like his Mother, Patty Stevenson. 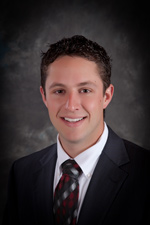 T.J. Stevenson was born and raised in Miles City, MT. He graduated from Custer County District High School in 2005 and then attended Montana State University of Billings, where he was a member of the golf team for three years and graduated with his Bachelor of Science in Business Administration. T.J. then attended Mount Hood Mortuary School in Portland, OR and graduated the summer of 2010. He returned home to work with his family and is part of the third-generation family business. He married Haley (Anderson) on May 11, 2019. They welcomed their firstborn child, Blakely Anne, on March 18, 2022. Together they raise dogs, horses and registered Black Angus cattle. T.J. is a member of Grace Bible Church, The Town and Country Club, Kiwanis, President of the Montana Funeral Directors Association, and a member of The National Funeral Directors Association. He enjoys golfing, fishing, hunting and is a sports enthusiast. 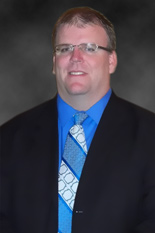 Dustin was born and raised in a small rural town in Eastern Idaho. He graduated West Jefferson High School in 1994. In August of 1998, he married his wife, Jessica. Together, they have three biological children: Tyson, Natalie, and Caiden, and has recently adopted their other daughter Calista. Dustin recently lost his first-born son Tyson in July of 2021. I have made it a point to love my children even more every day. Dustin attended Mount Hood Community College in 2010 and graduated in June of 2012. Dustin has worked for Stevenson & Sons Funeral Homes since his graduation. Dustin loves to fish and hunt with his children and spending time with his wife. Dustin loves to serve people and has especially grown to love the Northern Cheyenne people. He also loves to coach his children in sports whenever he can.

After losing my parents at a young age, I knew that this was what I was supposed to do in life. I have been taught that family is the most important thing in life and that we are all the same, even though we all have walked in different shoes in our lives, everyone deserves the same treatment and respect. 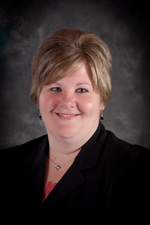 Tammy was born in Ekalaka, MT and graduated from Carter County High School in Ekalaka. She graduated from Miles Community College in 1996 with her Associate of Arts Degree and a Small System Computers Degree. She has been employed at Stevenson & Sons Funeral Home since 1997. Tammy is a member of Grace Bible Church, and in her spare time, she enjoys photography and quilting. 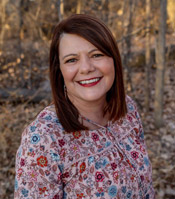 Vanessa was born in Wyoming and grew up in Montana, where she graduated from Eastern Montana College in 1991. She married her husband Ed in 1989, and they have 2 daughters: Alexis and Mikenna. Vanessa was an elementary teacher and school counselor for the Miles City School District for 25 years before retiring and going back to college. She studied at the Pittsburgh Institute of Mortuary Science where she received her Mortuary Science Degree. Vanessa is active in several community clubs, as well as a local Grief Support Group. She loves the outdoors, camping, hiking, reading, watching movies and football, and spending time with her family and friends. Vanessa is a member of the Montana Funeral Directors Association. 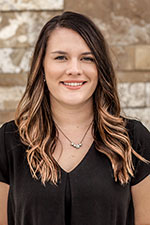 Brooke grew up on the family farm in Broadview, MT. She graduated Broadview High School in 2011 and went on to attend Montana State University Billings graduating with an Associates of Business Degree. After 5 years of working as an office administrator at a Pediatric Dental Office in Billings, MT she decided to venture out and start a new career path. Brooke attended the Mount Hood Mortuary Science Program in Portland, OR and graduated in the summer of 2020. Brooke started with Stevenson & Sons in the Summer of 2021 and is looking forward to making Miles City her home and getting active into the community. In her free time, she enjoys heading to the farm, driving combine during harvest and being with friends and family. 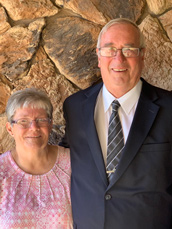 George has been a part of Stevenson and Sons since his retirement, as a Teacher of Agriculture Education, from Forsyth Schools in 2012. Jan Simmons joined Stevenson and Sons after her retirement from Forsyth schools in 2016, where she most recently was a Library aide. Jan and George have been married for 52 years. They are the parents of 5 children and have been a part of the Forsyth community for 30 years. Both are active members of the Church of Jesus Christ of Latter-day Saints, serving in the Billings Temple In addition to their association with Stevenson and Sons, both Jan and George are EMTs with the Rosebud County Forsyth Ambulance Service. George and Jan both enjoy serving others through there work with Stevenson and Sons and their EMT work. When they are not working, they enjoy traveling to see their children, grandchildren, great grandchildren and sights they have never before enjoyed. 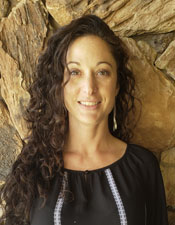 Stephanie was raised and graduated high school in Forsyth, MT.  She graduated from Montana State University Billings in 2013 with a Bachelor of Science in Psychology.  She previously worked for a local insurance agent for 12 years and maintains a Montana Insurance Producer License. She and her husband Greg have two children, Trinity and Kelllen.  Stephanie is currently pursuing her degree in Mortuary Science from the Dallas Funeral Institute while working for Stevenson and Son’s Funeral Home in Forsyth.  She enjoys watching high school sports, camping, fishing, and ATV riding with her family 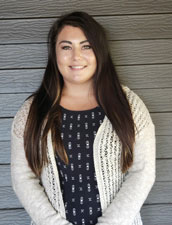 Kayla has been a lifelong Montana resident, growing up in Eastern Montana. She graduated from Forsyth High School in 2014. She was a CNA for two years and joined Stevenson and Sons Funeral Home in 2017. Kayla was in 4-H for ten years and enjoyed playing volleyball, Tennis and lifting. She and her son, Kieran, enjoy camping, and spending time with family and friends. 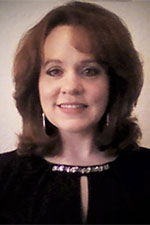 Lynn and her family moved from Columbus, MT to Terry, MT in July of 1981 where she and her 2 siblings all graduated from THS. Lynn has resided in Miles City for the past 30 years while raising her son, Jared. Lynn worked as an Advertising Sales Consultant and graphic designer for 20 years at the Miles City Star. Six months after her mom passed away in 2014, she joined Stevenson and Sons Funeral Home as a Family Service Counselor. Today, Lynn helps families in our community and the surrounding area to effectively preplan their own services. She feels very fortunate to be able to help families have peace of mind knowing their loved ones will be taken care of. In her spare time, Lynn enjoys being with family and friends, traveling and working on projects around her home.

How Can We Help You?